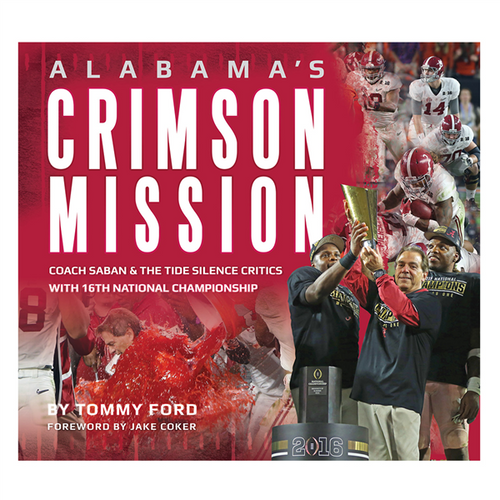 The Alabama Crimson Tide rolled to its 16th national championship in the football program’s storied history with its 45-40 victory over Clemson in January. In Alabama’s Crimson Mission, author and Tide insider Tommy Ford reveals how head coach Nick Saban and his players overcame a tough loss to Ole Miss to reel off 11 straight victories and reach the College Football Playoff National Championship Game against the Tigers.

Despite losing to Ole Miss by only six points in a sloppy, five-turnover game, the Tide was written off by the national media, declaring Alabama football a thing of the past. But the players ignored the noise. The upperclassmen decided to take matters into their own hands by calling a players-only meeting. Senior safety and kick-return specialist Cyrus Jones — who along with Reggie Ragland, Jonathan Allen, Ryan Kelly, Jarran Reed, A’Shawn Robinson, Derrick Henry and Eddie Jackson took leadership roles in the meeting — said, “We realized it was time to bring everybody together and just kind of re-state what we want from this team this year. We can’t dwell on what happened in the Ole Miss game. That’s gone; that’s in the past. We have to focus on the future.”

Jones’ “focus on the future” comment spoke volumes for this Alabama squad for the remainder of the season. Every game was an elimination game for Alabama, and, even more challenging, the upcoming six-game stretch was as brutal as any in Crimson Tide football history: three top 10 teams, plus another in the top 20. Against all odds, Alabama responded magnificently by winning all six contests and, in the process, climbed from No. 13 in the Associated Press poll prior to the Georgia win to No. 2 in the College Football Playoff rankings following its mid-November victory over Mississippi State. The winning streak infused new energy into the Tide players and coaches, and the Alabama football natio

The University of Georgia Football Vault

The Muscle Shoals: First Frontier of These United States