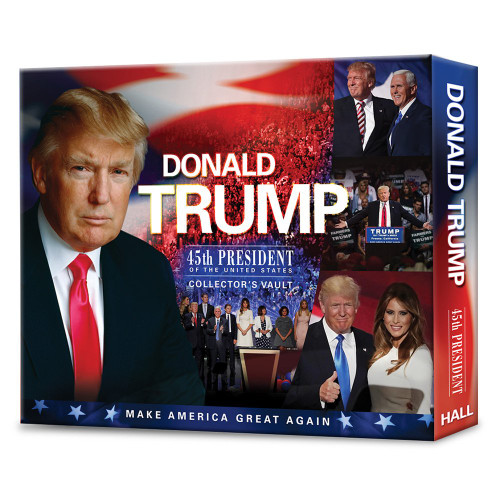 On November 9, 2016, Donald J. Trump addressed the nation as the first non-politician to be elected president of the United States in many generations. His historic election came at the end of a political campaign that was the most dramatic the country had ever witnessed a race of unprecedented firsts.

This richly illustrated memory-book showcases the life of President Trump from his childhood in New York to the dramatic 2016 presidential campaign. Tucked among its pages is a treasure trove of memorabilia: souvenir replicas such as buttons, posters, family photos, portraits, historic speeches, and more. These are set amidst a vivid narrative, historical images, and scenes from the Trump empire and on the campaign trail.

You'll meet Donald Trump's immigrant grandparents, who laid the groundwork for the family's success in America...walk the campus of New York Military Academy...go behind the scenes of Trump's early businesses...meet the beauty-pageant winners and famous celebrities who make up his star-studded life...watch his rise to the top of the national scene...and ride along as he campaigns to the White House.

This Collector's Vault book offers an unforgettable portrait of a hard-working, remarkable American, from his hopeful beginnings to his triumphant victory in the presidential arena.

(Items in the Red Hot Specials category may be slightly "hurt.")

Whitman Deluxe Cent Coin Board: A Penny Saved is a Penny Earned