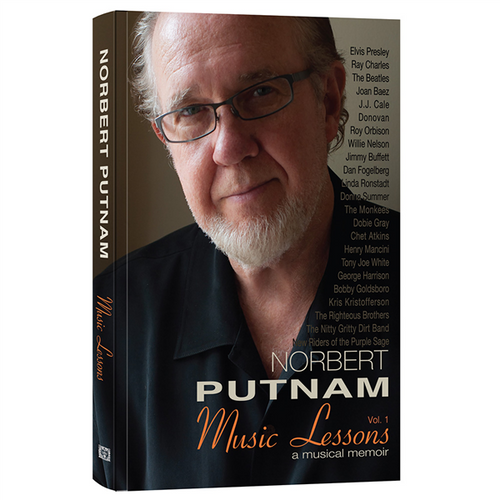 IT WAS THE SUMMER OF 1957, and 15-year-old Norbert Putnam was hunkered down with his father behind their garage in Florence, Alabama. Norbert had started playing bass in a local band and his father was dead set against it so he had pulled his young son aside to reveal a dark secret from his past - he had once played “that damned old bass” in the Beale Street bars of Memphis. He recalled the shootings, gambling, wild women, reefer heads, dirty hotel rooms, lack of pay . . . all recited with tremendous gusto, in an effort to frighten young Norbert. He wanted to convince him to pursue the path to college and a “normal, happy life.” The young man tried to remain still in an effort to withhold his excitement as visions of Memphis and music danced in his head. In spite of his father's intentions, at that moment an opposite decision was made. Norbert Putnam vowed, then and there, to devote his life to the pursuit of music.

Fast forward almost 50 years, and Norbert Putnam, after a sterling career, is still immersed in the business of music. He resides, once again, in Florence, Alabama with his lovely wife of 27 years, Sheryl, and their beautiful and devoted poodles, Sophie and Gracie.

With the release this year of his first memoir, Music Lessons he looks back on a career unrivaled in its diversity. As a studio musician, he was one of the original Muscle Shoals Rhythm Section players, helping creating the famous “Muscle Shoals sound” and putting this small Alabama town on the map with the 1962 Arthur Alexander hit, “You Better Move On.” Backing up Tommy Roe, The Righteous Brothers and four other American acts, they opened for The Beatles when the lads played their first American concert on February 11, 1964 in Washington, DC. After moving to Nashville in 1965 Norbert played bass on over 9,000 tracks with the likes of Elvis Presley, Ray Charles, Waylon Jennings, Willie Nelson, Dolly Parton, Roy Orbison, George Harrison, Henry Mancini, Al Hirt, Linda Ronstad

The Muscle Shoals: First Frontier of These United States