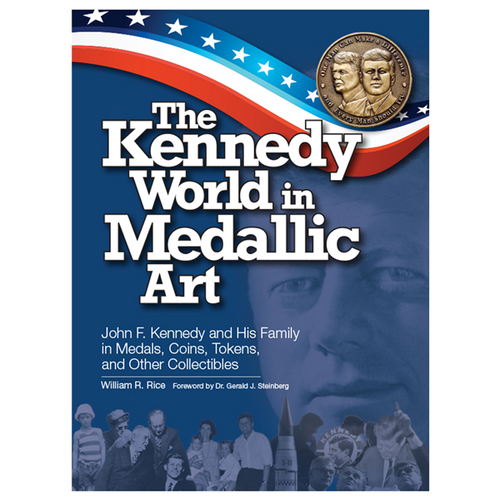 
In this monumental book, William R. Rice shines new light on the life and times of President John F. Kennedy. His exploration includes the history of the Kennedy family; JFK’s boyhood; his military service and early political career; his inauguration and presidency; Jacqueline and the children; life in the White House; the president’s assassination; and the world’s mourning and remembrance.
The story is told through touching and insightful essays illustrated by hundreds of coins, medals, tokens, stamps, and other memorabilia—some popular and collectible, like the silver 1964 Kennedy half dollar (with its mintage of 429 million coins), others rare and seldom seen, and some one-of-a-kind.
Special sections discuss subjects like satirical and critical pieces; brothers Robert F. and Teddy Kennedy; the Peace Corps; and paper money issued during the Kennedy administration.
In addition to colorful historical images and narrative, the book’s scholarly appeal is expanded by multiple appendices, a bibliography, and a full index. Collectors will benefit from the catalog numbering system and commentary on today’s market, along with more than 1,500 photographs.
“Historians will remain deeply indebted to Rice for his gigantic addition to the field of John F. Kennedy medallic art and related historical memorabilia.” — Dr. Gerald J. Steinberg
Hardcover, 304 Pages, Full Cover, 8.5” X 11”

Search & Save: Half Dollars – Classic Coins from the 1800s to Today

Search & Save: Old U.S. Dimes and Quarters – Classic Coins from the 1800s to Today