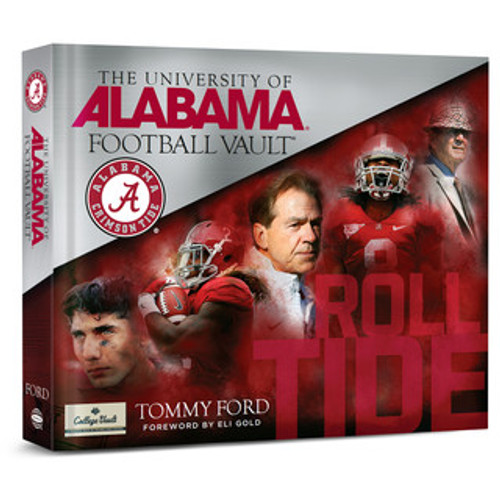 Starting in 1892, the Alabama Crimson Tide has had one of the most respected programs in college football, but perhaps the team has never been as dominant as it has been over the last decade. In the third edition of The University of Alabama Football Vault®, author Tommy Ford details the history of the Crimson Tide football program, including the team's National Championship Game victories since 2009. But what makes this detailed "scrapbook" unique are the vintage photographs, artwork and memorabilia discovered on campus, including at the Paul W. Bryant Museum. Throughout this book, Tide fans will find reproductions of old game program covers, historic tickets, vintage bumper stickers and much more. Replicas include a ticket to the 1894 Auburn game, a newspaper clipping from the 1926 Rose Bowl, a 1930 Georgia game booklet, a 1960s Bryant bumper sticker, a press pass to the 1966 Orange Bowl, a 1980s "Roll Tide" poster, a lasting memory of late Athletic Director Mal Moore and a special sticker commemorating 10 seasons under Nick Saban. No Crimson Tide fan should be wihout this home archive of Alabama's long and illustrious football history.

"Much has been written about Alabama football through the years, but rarely has a book so captured the visuals of Alabama football as this one does. This book's stunning photography celebrates Alabama's illustrious history and certainly brings back memories for all of us. The replicas of memorabilia are the best I have ever seen. Ticket stubs, game program covers–you name it, and it's in this book. Thumbing through this book is like taking a stroll through the Bryant Museum!" –Eli Gold, Voice of the Crimson Tide

(This item may be slightly "hurt".)

The University of Georgia Football Vault

SILVER: Everything You Need to Know to Buy and Sell Today

Whitman Deluxe Cent Coin Board: A Penny Saved is a Penny Earned