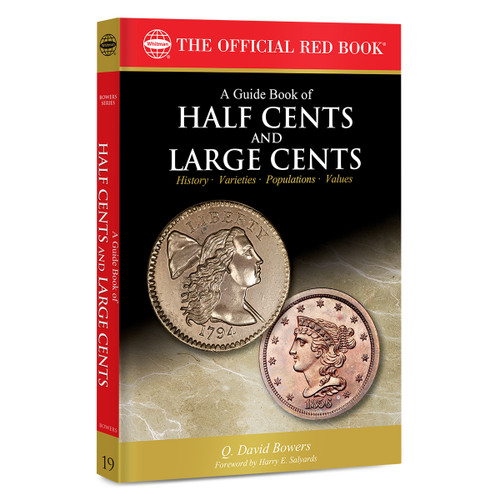 Volume #19 in Whitman’s best-selling Bowers Series covers two of the earliest U.S. coin denominations: half cents and large cents. These classic copper coins were made from 1793 (the year after the Philadelphia Mint was founded) into the late 1850s (shortly before the Civil War started). In this colorfully illustrated book, America’s popular early coppers are given the famous Q. David Bowers treatment: insightful study, rich historical background, and detailed data analysis. Bowers—the “Dean of American Numismatics” and the most prolific numismatic author of all time—tells you everything you need to know to be a smart collector: how to evaluate quality, determine value, understand the market, and make good buys. Along the way, he explains why, in all of American coinage, half cents and large cents possess a special charm. You’ll learn how the history of the developing nation shaped the coins’ designs and production, and the effects of the War of 1812 and other national events on their coinage.

Bowers provides a wealth of information on each issue: mintages, existing populations, grading standards, values, auction records, keys to collecting, and more. Historical background sets the coins in the broader context of American life from the 1790s through the 1850s. Hundreds of full-color images, careful analysis, and Bowers’s engaging style make this book a treat for anyone interested in our nation’s early history.