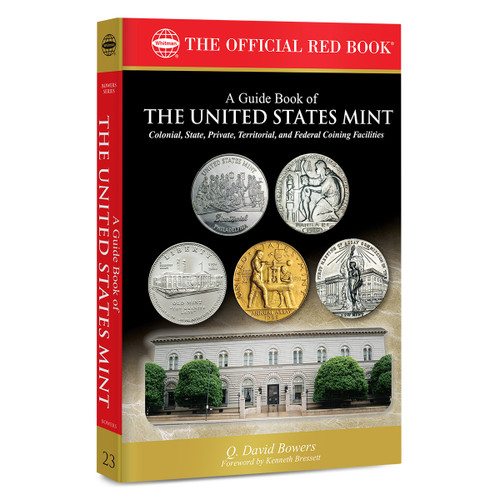 The 23rd volume in the award-winning Bowers Series explores the heart of American coin collecting: the United States Mint.

The U.S. Mint is the source of the little copper, silver, and gold objects of material culture and value that numismatists collect, study, and catalog. It is the sole manufacturer of the nation’s legal-tender coinage, and its products are used every day by millions of Americans nationwide. As a repository its facilities safeguard more than $300 billion in national assets. It employs nearly 2,000 people, including its own police force.

This unique book unearths a treasure trove of numismatic knowledge, including the history of the Philadelphia Mint and every Mint branch, plus private and territorial mints; information on historical and modern minting procedures; a study and price guide of historic medals and other collectibles commemorating the Mint; data on every director of the Mint and superintendents for every branch; and illustrated behind-the-scenes looks at the modern Mint and its facilities.

“Dean of American Numismatics” Q. David Bowers presents hobbyists with invaluable information on every American mint from pre-federal coinage to the modern era, including a section on mints that never were!

“Dave Bowers takes you on a ‘you are there’ experience with over three dozen mints, federal, state, and private. . . . I know you will enjoy this delightful narrative!”
—from the foreword by Kenneth Bressett, senior editor of the Guide Book of United States Coins