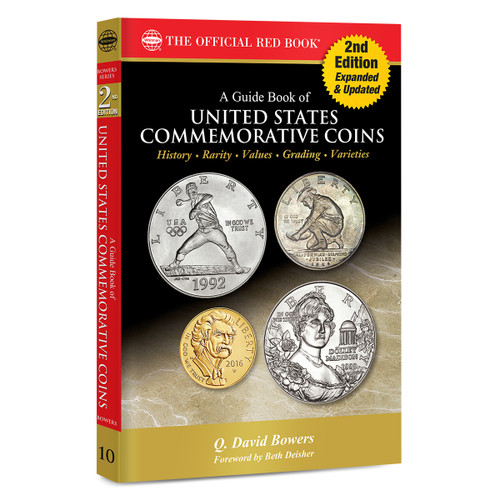 Collecting United States commemorative coins is like compiling a photo album of the nation’s history. Because these coins represent so many aspects of America—from dramatic battles to Olympic games, from presidents to national parks—each collector can build a set that has its own unique and personal significance.

In this handy volume Q. David Bowers chronicles the history of commemorative coins in the United States from 1892 to the present. He explores how a commemorative develops from initial concept to final coinage. On the technical and production side, you will learn about die preparation, the coining process, mintages, Proof and assay coins, and distribution. On the market side, Bowers tells you ways to build your collection, and gives advice on evaluating quality, being a smart buyer, realities of the marketplace, Full Details, certification, population reports, registry sets, establishing fair market prices, and more.

New appendices share an interview with a commemorative-coin designer from the Artistic Infusion Program and a wealth of designs considered for recent commemoratives.

This book is a single-volume library for anyone interested in the people, places, and events that make America great, and how they are honored in our nation’s coins.

“Q. David Bowers is the consummate numismatic storyteller. Each commemorative coin has a story and there is no one better to guide you through their ins and outs than Dave Bowers.”
—from the foreword by Beth Deisher

A Guide Book of Buffalo and Jefferson Nickels, 2nd Edition