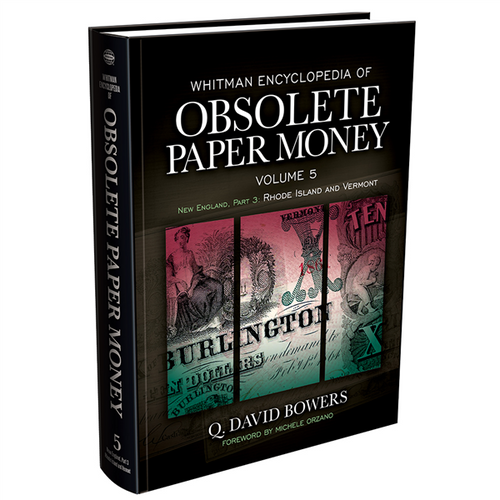 The Whitman Encyclopedia of Obsolete Paper Money is a multiple-volume study of currency issued by American banks from 1782 to 1866, before the modern era of National Banks and the Federal Reserve. Volume 5 is the fourth and final volume on New England, covering the states of Rhode Island and Vermont.

The “Dean of American Numismatics,” Q. David Bowers, has compiled decades of research from 18th- and 19th-century bank reports, contemporary newspapers, and other primary sources to create these books.

He gives the history of 104 Rhode Island and Vermont towns and cities, as well as of the 267 banks in those towns that issued this uniquely American currency. 5,044 individual notes are studied, and hundreds are pictured in full color, with information on grading, rarity, values, significant auction results, advice for collectors, and more. The Whitman Encyclopedia of Obsolete Paper Money is a monumental work. Essential for collectors, it is equally valuable for American historians. Volume 5 is an immersion in the life of New England and our nation from the Revolution to the Civil War.

“Destined to become a landmark event in the unfolding history of U.S. paper-money collecting. These works should be on the shelves of our institutions of higher education and in historical societies of all the states covered.” — Fred Reed, editor, Paper Money Magazine

“Bowers has clearly fallen head over heels for the allure of obsolete notes. Though the banks that issued them are long gone, the notes themselves help trace the roots of goods and services provided to Americans in the 1700s and 1800s. With the Whitman Encyclopedia , collectors can enjoy the designs and history contained in these pieces of paper.” — Michele Orzano, senior editor, Coin World