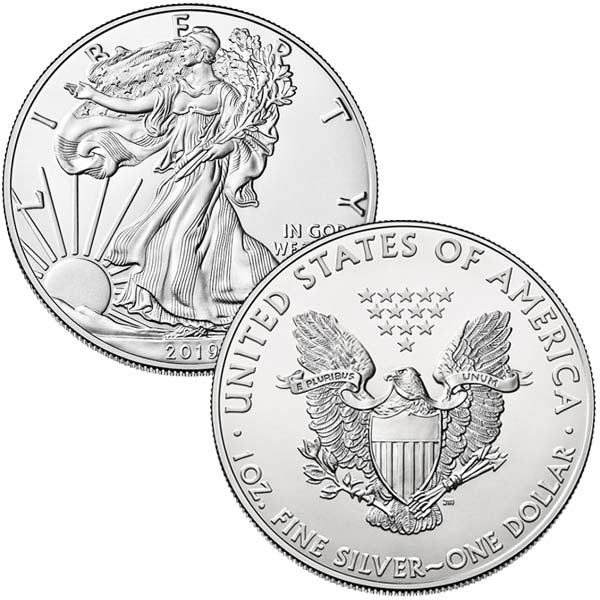 In November 24, 1986 the United States Mint first released the American Eagle silver dollar. The American Silver Eagle went on to become the official silver bullion coin of the United States. These beautiful and unique coins were guaranteed to contain one troy ounce of 99.9% pure silver. It was produced by the Philadelphia Mint, the San Francisco Mint, and the West Point Mint.

This coin has a broad appeal to most collectors not only for its rare metal content, but also for the beauty of its design. The front of the coin is rendered after the design created by Adolph A. Weinman, entitled "Walking Liberty". This design has long been a public favorite, both iconic and beloved. The reverse of the coin was designed by John Mercanti and portrays the classic American bald eagle, positioned behind a shield. In its right talon, the eagle grasps an olive branch, and a bundle of arrows in its left, a tribute to the design of the Great Seal of the United States. Above the eagle are thirteen five-pointed stars representing the original Thirteen Colonies.

There are two different varieties of American Eagle silver dollars that are produced by the American Silver Eagle program, and those are the bullion variety and the collector editions.

Bullion coins are produced purely for the investment market. They can be struck at any branch of the U.S. mint, but do not carry a mintmark. They are often sold in bulk to coin dealers, who in turn sell to retailers. These coins are not sold for the collectors market, although some people do collect them.

These coins range in value anywhere from $10 a coin to $1,000 a coin, depending on the year produced, the condition they are in. Each year not only are collectors encouraged to purchase these coins, but silver-buyers and investors as well. The metal content of these Silver American Eagle coins guarantees quality, and these coins carry consistent popularity across the globe.

Everything you need to know about starting your own collection of these special American eagle silver dollars is found in John M. Mercanti's American Silver Eagles - A Guide to the U.S. Bullion Coin Program, available now in our shop!

Also make sure to check out our U.S. Silver Eagle album, a strong, soil resistant album designed to keep your priceless coins in mint condition.