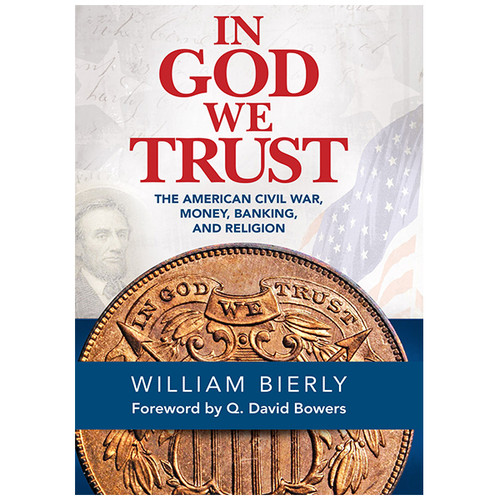 Our national motto debuted on United States coinage during the chaos and heartache of the American Civil War. It has appeared on our money ever since. Numismatic researcher William Bierly has dug deep into the origins and history of “In God We Trust.” Now he tells its full story, introducing Reverend Mark Watkinson, the preacher who rallied the Treasury Department to “recognize Almighty God in some form on our coins” . . . Mint Director James Pollock, former governor of Pennsylvania, “a commanding figure” who worked toward the same vision . . . and Treasury Secretary Salmon P. Chase, nephew of an Episcopal bishop, who marshalled our nation’s vast resources and financed the war with bold innovations. President Abraham Lincoln figures in the tale, as does a cast of military generals, wealthy industrialists, poets and artists, powerful bankers, and everyday Americans, North and South.

Bierly shows how the upheaval of the Civil War changed not just the face of our coins and paper currency, but the very foundations of modern American banking and finance.

The story continues into the renaissance of beautiful American coinage started by President Theodore Roosevelt in the early 1900s . . . the revival of the 1950s, and the “Unwritten Constitution” . . . legal challenges by modern-day atheists . . . and controversy surrounding “In God We Trust,” public and school prayer, Ceremonial Deism, and other hot topics in today’s headlines.

“One of the most detailed, intricate, and fascinating books in the field of American numismatics—and in American history in general. Bierly approaches the subject respectfully on all sides, with color, personality, dashes of humor, and dogged pursuit of the truth.” — Q. David Bowers, former president of the American Numismatic Association