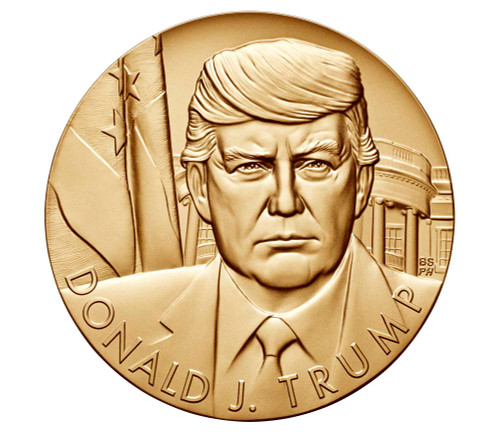 The United States Mint produces a series of impeccably detailed bronze Presidential medals, one for every chief executive from George Washington to Donald Trump and beyond. They make unique gifts and are educational collectibles for everyone who appreciates American history.

This massive (three-inch diameter, weighing nearly a half pound) bronze medal of President Donald J. Trump features a portrait of the president in front of the White House, with an American flag behind him. The reverse shows the Presidential Seal and another view of the White House, along with an inspiring quote from President Trump: “The forgotten men and women of our country will not be forgotten again.” The design bears the date of his inauguration (January 20, 2017) and is encircled by stars.

Struck at the Philadelphia Mint, it was authorized by 31 U.S. Code § 5111(a)(2) and is an official medal of the United States Treasury Department—a piece of history that will never lose its national significance.