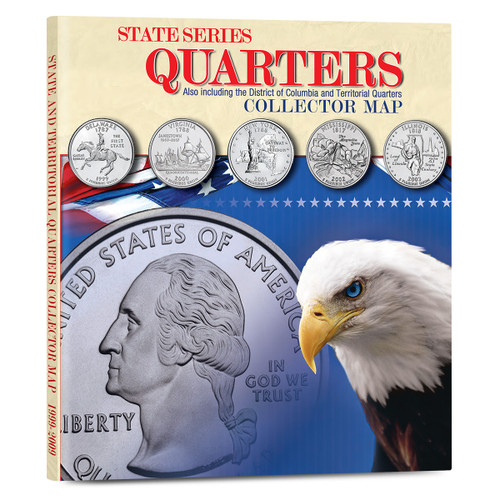 Display your state series quarter collection in this educational Collector Map.  Special “push fit” foam material makes it easy to insert your coins.  There are 56 openings providing an area to store one each of the 50 states, District of Columbia, and Territorial quarters released from 1999 – 2009.  You have a choice of collecting circulating quarters from either the Philadelphia Mint (P mintmark) or the Denver Mint (D mintmark).  There is one opening for each state or territory to complete a set of 56 state series quarters.   The map is 13.2” x 39.75” with an inert form material that is safe for your coins.

About the 50 Statehood, D.C., and Territorial Quarters Collection

The 50 States Commemorative Coin Program Act was signed by President Bill Clinton on December 1, 1997.  It called for the replacement of the design on the reverse side of the quarter dollar with designs representing each of the 50 states.  Five quarter dollars with distinctive reverses were released each year, in the order in which the states joined the Union.  The program began with the Delaware quarter in 1999 and ended with the Hawaii quarter in 2008.

The design-selection progress varied somewhat across the series.  Generally, each state’s governor selected a series of designs or design concepts from many public submissions.  A government-appointed committee approved the final design, with a Mint artist either developing from an existing image or created based on a chosen concept.

The obverse design is a modification of John Flanagan’s George Washington quarter design.  Legislation allowed the Mint to move the inscription UNITED STATES OF AMERICA and the words QUARTER DOLLAR from the reverse to the obverse.

The reverse designs also required repositioning of mandated legends:  the name of the state and the year it attained statehood appear along the top border, while the words E PLURIBUS UNUM appear along the bottom border just beneath the year of issue.

An additional, one-year program of commemorative quarters honor the District of Columbia and the U.S. territories (Puerto Rico, Guam, American Samoa, the U.S. Virgin Islands, and the Northern Mariana Islands) in 2009.  The obverse continues the statehood quarters design, and the reverse depicts some aspect of history, tradition, or nature for D.C. or one of the territories.