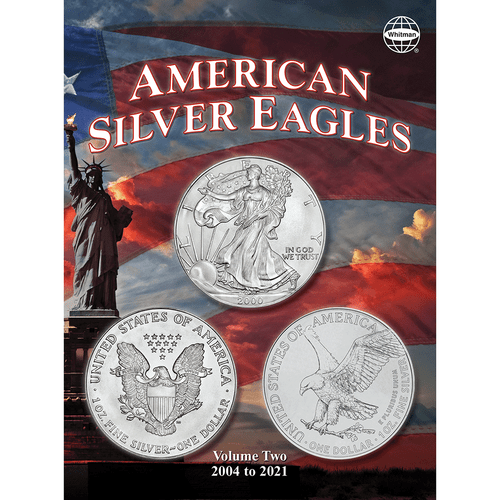 The American Silver Eagle (face value $1, actual silver weight one ounce) is a legal-tender bullion coin with its weight, content, and purity guaranteed by the government of the United States. Investors buy tens of millions of the coins every year as a convenient way to acquire silver. (The American Silver Eagle is one of the few silver coins allowed in individual retirement accounts, or IRAs.) For collectors, the United States Mint also issues Proofs, packaged sets, and other special numismatic formats. In addition, many hobbyists collect each year’s regular bullion strike—these are the coins you can display in this folder.

Composition of the American Silver Eagle is 99.9 percent silver and 0.1 percent copper. Its weight is 31.103 grams. It measures 40.6 mm in diameter and contains one full ounce of fine silver. The obverse of the coin features Adolph A. Weinman’s Liberty Walking design, as used on the circulating half dollar of 1916 to 1947. Weinman’s initials appear on the hem of Miss Liberty’s gown. From the American Silver Eagle’s debut in 1986 through 2020 and partway into 2021, its reverse design was a heraldic eagle created by Mint sculptor-engraver (later chief engraver) John M. Mercanti.

In 2021 a new reverse design was introduced, after a portfolio of 39 candidates was reviewed by the U.S. Commission of Fine Arts and the Citizens Coinage Advisory Committee. The new design was selected by the Secretary of the Treasury. It shows an eagle in flight, by artist Emily Damstra. This is expected to be the coin’s reverse for another generation.