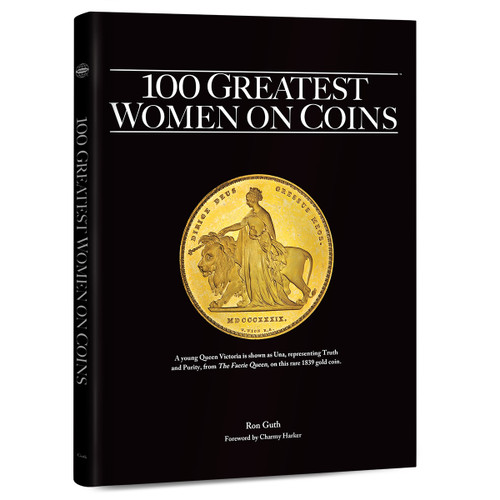 100 Greatest Women on Coins is the 10th entry in Whitman Publishing’s popular “100 Greatest” library. “This book is a celebration of women’s impact on numismatics,” says award-winning author Ron Guth. Each notable woman is described with an illustrated essay and colorful images of the coins on which she appears. Guth also discusses the long history of women featured on coins, and how anyone today can assemble a remarkable and meaningful collection. The book’s scholarly value is further expanded with a checklist for the specialist, and a bibliography for further research.

More than 700 queens, princesses, empresses, actresses, political and religious leaders, goddesses, and other women were up for consideration. They were voted on and ranked by members of Women in Numismatics to determine the 100 Greatest Women on Coins.

The 100 Greatest Women on Coins include real women such as Cleopatra, Martha Washington, and Elena Aladova; goddesses such as Athena, Demeter, and Nike; allegorical women (who represent an idea or nationality) such as Miss Liberty, Mother Earth, and Britannia; and women in art, such as La Pietà and Auguste Renoir’s Girls at the Piano. Queen Elizabeth II has appeared on billions of coins during her reign. Queen Victoria was featured on copper, silver, and gold coins throughout her 64-year rule, the longest of any British monarch. These real women are joined by mythical women like Angels; monstrous women like Medusa; caretakers like Mother Teresa and Florence Nightingale; women from art and fiction, like Heidi and Anne of Green Gables; famous Americans like Dolley Madison and Marilyn Monroe; and other royals like Princess Diana and Queen Nefertiti.

“100 Greatest Women on Coins is a celebration of the hundreds of women who have appeared on coins from ancient times to the present,” says author Ron Guth. “This is a book about mothers, daughters, sisters, wives, empresses, queens, ballerinas, athletes, goddesses, regents, allegorical figures, and the many forms in which women have appeared on coins. It’s the story of women who have made important contributions to history, politics, the arts, the sciences, and myriad other fields.”

The coins on which the 100 Greatest Women appear include valuable gold and silver pieces, unusual commemoratives, and super-rarities, as well as more common pieces that you can find in your pocket change.

The book includes a foreword by Charmy Harker, president of Women in Numismatics and a noted coin dealer, who calls it “a fascinating look into the important role women have played throughout numismatic history and throughout history in general.”